Cockers In The Field


COCKERS IN THE FIELD OF YESTERDAY

In the field trials Spaniels are required to cover ground no farther than 30 yards from their master or mistress. They are to find the game, to flush it and to sit and stay until his master or mistress gives the command to retrieve the bird on the land or in the water.

In 1864 Mr. John Douglas staged the first officially recognized field trial. He wrote the rules, invited the judges and put up all the prize money. This first trial was held on a Tuesday, April 18, 1865, at the Southill, Bedfordshire Estate of Samuel Whitebread. There were 16 bird dogs that competed.

The first field trials just for Spaniels were held on January 3 and 4, 1899. It was sponsored by the Sporting Spaniel Club in England. The President of the Club didn't care for the performance of the dogs he was quoted as saying, "All Spaniels were unsteady to shot and wing. All ran mute with the exception of one puppy."

The second trial held in December of the same year found the Club President making another comment. "All winners quiet, mute, and too highly trained!"

Centuries ago a Spaniel possessing a musical, but not noisy voice was all the more valuable if it was distinguishable in it's notes between the various kinds of game. Today any Spaniel that yips or gives tongue on game in the field trials will be severely penalized.

The American Spaniel Club held it's first licensed field trial in 1930, there were 72 entries.

From 1953 to 1962 the American Spaniel Club's Field Trial Committee yearly held the National Cocker Championship Trials. Since 1963 there had not been a licensed field trial for Cocker Spaniels because of a loss of interest by the fancy.

In 1983 the Washington State Cocker Spaniel Club tried to revive field trials when they held the first sanctioned field trial since early 1960. In this same time period the American Spaniel Club also held Sanctioned B Field Trials. These events were held twice (2) a year until 1988 when the American Kennel Club's Hunting Test for all Flushing Spaniels was developed.

The requirements of the dog was to earn four (4) qualifying scores for the Junior Hunter (JH), five (5) for the Senior Hunter (SH) and six (6) for the Master Hunter (MH) titles.

Many books have been written to help you in training a Flushing Spaniel. 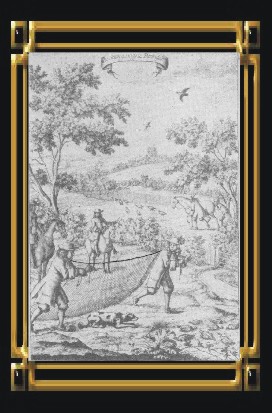 In "The Master of Game," based on Gaston Phoebus's "Livre de Chasse," of 1387, a work written between 1406 and 1413, by Edward, the second Duke of York, we have the first suggestion that the breed was Spanish. "Hounds for the hawk, Spaniels, that come from Spain, running and wagging their tails before their master, raising or starting fowl and wild beasts. How useful they were for their right craft, which was to act as "crouchers" (setters), helping in this manner to take both partridges and quail with a net. It was the way game was taken in those days.
The sportsmen went over the fields with a net, their hawks up in the air, Keeping the game hiding close to the ground. The game dared not move lest the hawk should see them. The Spaniels, on scenting game, turned in the direction in which the game was hiding. The hawks kept the birds from rising so the dog could get very near to the game. The Spaniel was trained to go down, while the men placed the net over him and the birds. If the dog had stood it would have made working the net difficult.

The First Writing About Dogs